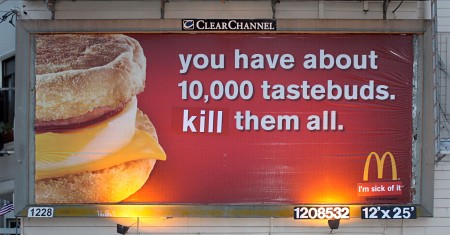 This month, Michael Moss’s Salt Sugar Fat: How the Food Giants Hooked Us hit the bookshelves in a big way. He exposes the big food companies’ practices of scientifically engineering junk food to be physically and emotionally irresistible. Moss explains that he didn’t start off inspecting processed foods, but “one of [his] most trusted sources in the processed food industry said, ‘…if you want to see something that’s making larger numbers of people ill, look at what’s intentionally added to processed food namely salt, sugar and fat’” 1. His research quickly proved his source right. Moss points to tomato sauce as a prime example: “the largest ingredient, after tomatoes, is sugar. A mere half-cup of Prego Traditional, for instance, has the equivalent of more than two teaspoons of sugar, as much as two-plus Oreo cookies” 2.

We at Fearless Future have been closely watching this unfold. We read the New York Times article, listened to interviews on NPR, and then the other day I watched a discussion led by Dr. Oz, a strong influencer in wellness that includes food-purchasing choices. Influencers have the power to sway potential buyers and often have marketing activities oriented around them 3. Ultimately, I was left confused after the interview. There was ample discussion on the science of sugar, salt, and fat and their effects on the brain, but Dr. Oz hesitated to draw strong conclusions about the processed food manufacturers. In fact, he admitted to working closely with some of these companies and more than once expressed understanding about the companies’ motives. “Many companies are merely trying to keep their brand in the mix in an atmosphere of stiff competition and limited profit margins,” Dr. Oz argues, “However, that’s no excuse for endangering the health of the public by developing new foods and drinks loaded with more sugar, more fat and more salt” 4. He makes a valid point about the world of business, but his role, as a doctor speaking to the American public, should be to guide consumers towards better food choices. Instead, all he offers on his website as advice is, “In order to protect yourself, become a food label vigilante. Actively look for foods that are lower in sodium, and have less sugar and lower fat. You can also seek out natural, plant-based snacks and food” 4. This isn’t new advice but more significantly, it doesn’t offer any practical examples. Who do you know refers to fruits and vegetables as “plant-based snacks and food”? I’m just not convinced that Dr. Oz has his viewers best interests in mind.

One of Moss’s case studies that you can read in the New York Times article is about a popular Oscar Mayer product. Moss writes, “Kraft’s early Lunchables campaign targeted mothers. They might be too distracted by work to make a lunch, but they loved their kids enough to offer them this prepackaged gift. But as the focus swung toward kids, Saturday-morning cartoons started carrying an ad that offered a different message: ‘All day, you gotta do what they say,’ the ads said. ‘But lunchtime is all yours’” 2. Processed food manufacturers are manipulating developing brains. Companies deliberately target children in their marketing but put the blame of obesity squarely in the consumers’ laps. It’s not hard to draw a comparison to the tobacco industry.

My point is marketing is a powerful—and potentially dangerous—tool. That’s why Fearless Future is committed to what we do: serving nonprofits and small businesses that support the common good, not the bottom line. We see a future of marketing for good as Moss ends his New York Times article with an inspiring story about “deadly dull” carrots marketed as junk food: “‘We act like a snack, not a vegetable,’ [former Coca-Cola executive] told… investors. ‘We exploit the rules of junk food to fuel the baby-carrot conversation. We are pro-junk-food behavior but anti-junk-food establishment’” 2. We don’t expect any sweeping changes in the industry, but it’s encouraging to see sharp-minded moguls use marketing principles to promote positive products.

Use Your (Web) Prowess For Good

I work towards the betterment of the world, but I don’t picket or rally or march. I can’t make financial contributions yet. I’m a loner. I don’t like crowds so I’d rather not gather in large groups of people, or make cold calls for the benefit of democracy. I much prefer to work at my own quiet pace. I can help a nonprofit make a beautiful website that collects donations, rallies volunteers, and highlights the organization’s benefits and successes. I’m a web developer, writing code, editing scripts, and changing settings. I see eloquence in the way computer code renders visually; it is artistry expressed between architectural layers. I leave the grass roots protesting to someone else while I do the unsexy structural work that every nonprofit needs.

I thank my colleagues who have the gift of gab that can make the phone calls, organize local rallies, and speak to Congress. You excuse me from uncomfortable social interactions like small talk. I thank you with my tireless brain that organizes and manipulates indecipherable sentences of letters and numbers, the ones that make the new annual report available for download. I’m also the one who added the rotating gallery on the photos page. We all have to find our place to make progress happen; I have found mine.

Marketing pervades our daily lives and nonprofits must not ignore its dominating influence. Picture a day in which commercials for fresh produce are as successful, exciting, and pervasive as campaigns for fast food. Imagine a day where your child begs you for fruits and vegetables instead of a trip to McDonald’s.

The potential for positive work in this field is monumental. I collaborate in a trio of creatives committed to the success of nonprofits. What we have to contribute is our expertise in nonprofit marketing, our eye for compelling design, and our confidence in marketing’s power.

I dream that one day, social marketing and design will be as powerful and influential as traditional marketing. I can do my part every day, sitting alone in front of my computer, one keyboard click at a time. My digital talents are my contribution and I choose to use my (web) prowess for good.

As a young adult today there is much to take note of; a sort of pressure to be on the “up and up” of things going on. I am constantly checking my Facebook, Twitter, and texting my friends. With this surge of information, I can often feel bombarded with information overload. That goes for any young person that has school, work, and a social life to manage. With so much going on and an app for everywhere you go, where can young people find answers to the most private issues?

For example, an issue such as reproductive rights can seem private, but the marketing of organizations such as Planned Parenthood and directed towards teens is very public. With such sensitive issues, things can get messy very quickly. So my real question here is: in marketing the awareness of reproductive rights for teens, who is doing it the right way and being effective? I have a few great examples that as a young adult I have seen and have had an impact on my life.

A few years ago I was watching MTV, and I saw there was a rap contest to see which teen could write the best rap lyrics about HIV testing and safe sex. The person that won had Common, an American hip-hop artist, rapping their lyrics. I saw the resulting commercial 20 or 30 times and each time I thought, “I hope this reaches many more teens.” I think this campaign was great because:

Another great example of reproductive rights marketing is a program through Planned Parenthood. Throughout Tucson and other cities around the nation there is the Teen Advocate Project (TAP). TAP enables students who have children of their own to stay enrolled in high school. My high school had the program which consisted of daycare for students with children under 5 years old, birth control assistance, and all other sexual awareness needs. The pamphlets given out were provided by Planned Parenthood. It was a great source of media and involvement that directly got in the hands of youth that needed the message.

Though there are many more programs out there for sexual rights advocacy, MTV and Common’s HIV rap and the TAP Program through Planned Parenthood directly affected me because they left such a lasting impression.

Planned Parenthood—Before you hook up, hook up with us.